You are here: Home / Fires/Accidents/Disasters / Floodwaters force closing of I-29 again 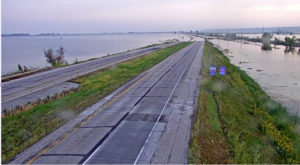 DOT view of I-29 near the Honey Creek exit.

Frequent users of Interstate 29 in western Iowa can’t seem to catch a break.

Renewed flooding over the weekend has again forced the closure of a ten-mile section of Interstate 29. Due to water over the highway, it’s barricaded from Exit 61 near Crescent to Exit 71 near Loveland. It’s at least the fourth time I-29 has been closed by flooding in western Iowa this year and that stretch of roadway was just opened by the DOT on Friday.

The Missouri River at Omaha is rising and should crest near flood stage at 29 feet later today.