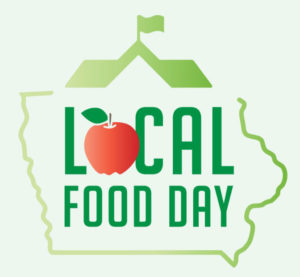 Teresa Wiemerslage, the program coordinator through the ISU Extension, says to take part, schools must serve at least two locally-sourced items for breakfast or lunch. Local foods can include produce, meat, eggs and dairy.

“Iowa’s Local Food Day was started last year as a way to encourage schools to put more Iowa-grown and -produced products on lunch trays,” Wiemerslage says. “We’ve seen a lot of interest and a lot of excitement from the schools as they look find to more farmers to source from.”

There’s a huge misperception, she says, as far as Iowa being an agricultural state that helps feed the world. “Iowa is a state that imports more than 80% of its food,” Wiemerslage says. “Even though we are the #1 ag producing state in any aspects, so much of that is crops that are grown for feed for animals or fuel and we end up bringing in a lot of the food that we eat.”

She says the program is growing significantly from its debut a year ago. “As of last week, we had over 42 school districts signed up and we were looking at over 80,000 meals,” Wiemerslage says. “I know I’ve added probably 20 schools to the website this week.”

Funding for the effort comes from a U.S.D.A. Specialty Crop Block Grant to the Iowa Department of Agriculture.