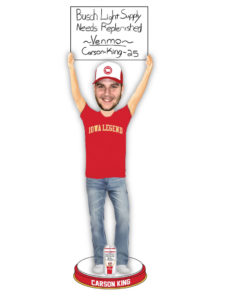 The man who raised more than three million dollars in donations for the University of Iowa Children’s Hospital with a single sign is being honored with his own bobblehead.

The founder and CEO of the National Bobblehead Hall of Fame and Museum in Milwaukee, Phil Sklar, has released the Carson King bobblehead. “He went to College Game Day as just a regular guy looking to have a fun time and get ready for the Iowa-Iowa State game — brought that hand-drawn sign and really inspired a lot of people to do good,” Sklar says. “We thought a bobblehead was the perfect way to honor him — so when we reached out to him with the idea last week and he loved it — we ran with it.”

King’s hand-drawn sign that requested beer money is featured on his bobblehead. Sklar says the bobblehead features him holding the sign and the base has his name on it and he is wearing a shirt that says “Iowa Legend.” “Which is pretty much what he’s been called worldwide,” Sklar says. King got more than enough for beer money and decided to give all proceeds to University of Iowa’s Children’s Hospital, even though he has always been an Iowa State fan.

Sklar says he will donate $5 from every bobblehead sold to the Children’s Hospital King Family Fund. There is an artist’s rendition of the bobblehead posted on the museum’s website. He says now that the rendition has been approved, the sculptures will sculpt it and get it approved and then it will go into production and you can order them by mail. They are targeting no later than January to have them ready.

The bobbleheads will be individually numbered and cost $25 each plus a shipping charge of $8. The website is: www.bobbleheadhall.com.