You are here: Home / News / Warren says she’ll put out a plan to finance ‘Medicare for All’ 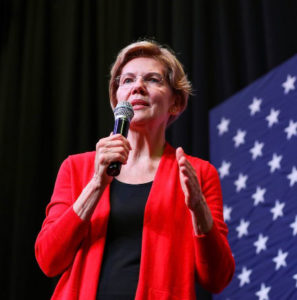 Democratic candidate Elizabeth Warren says in the coming weeks she will release the policies she’d pursue as president to finance “Medicare for All.”

“I’m ready to put out a plan soon on exactly what the costs will be and how to pay for it,” Warren said during a news conference in Indianola earlier today.

Warren was pressed repeatedly during last week’s televised debate for details about how to pay for Medicare for All. Warren told reporters in Indianola that there have been many estimates on how much Medicare for All might cost and many different payment streams exist.

“And I’ve been working on how to get the exact details to make that work,” Warren said.

No one in today’s Simpson College crowd who asked questions of Warren during the event brought up the topic. Warren concluded that appearance by saying she’s got a little more work to do on the financial details, then she pledged as president she would ensure the cost of health care is reduced for middle class families. Warren told reporters many of the people who line up to take “selfies” with her share concerns about their out-of-pocket costs even when they have private insurance.

“The American family just can’t stand this any longer. They cannot bear the costs. People are still filing for bankruptcy because of health care problems,” Warren said. “Health care is a basic human right and we need to fight for basic human rights.”

Warren also brought up the issue at an event this evening at Drake University in Des Moines. Some of the other candidates who’re raised concerns about having Medicare for All be the party’s platform in 2020 are speaking at an event in Cedar Rapids tonight.