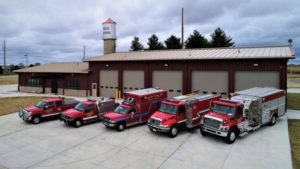 The new New Viena fire station is now in use.

After years of planning New Vienna has a new fire station and community center with city office space.

New Vienna/Luxemburg Fire Chief Mark Lukan says the fire station portion of the building is a big improvement. “It’s about triple the size of our old fire station, it has way more office space, way more room for our trucks and gear and storage. And now we are able wash our trucks without getting our gear wet,” Lukan says. “Most important we’ll have more room for inside training during cold and rainy weather.”

He says the community center portion is also a welcome addition. He says it gives people a place to hold smaller gatherings like Christmas parties or graduations. “It’s beautiful,” the chief says. Lukan says it has been impressive to see the community step forward to help fund the building.

“Some of the budgets we were looking at were getting blown out of the water — so we had to come back to the drawing board and settle on the size of the building we have. Once that happened we sat down and decided how we were going to try and fund it,” Lukan says. “So, we sent out a big capital campaign letter and within two-and-a-half weeks we had over $200,000 donated to get the project kicked off — it was amazing.” He says the donations meant the city would only have to bond for $800,000 for the project that cost around $989,000.

Lukan says they are still taking donations to help pay it off. A dedication and open house was held Saturday to celebrate the finished building. The old fire station will still serve be used too — three of the bays will hold city maintenance equipment, one bay will house the town’s police car and the fifth bay will be used as extra storage space.