You are here: Home / News / Forecast calls for snow in the eastern part of the state 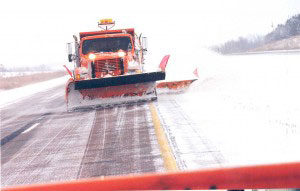 Iowa’s first measurable snowfall of the season is expected to start arriving within a matter of hours.

Meteorologist Rod Donavon, at the National Weather Service, says snowfall amounts will vary from just a trace to the potential for an inch or two.

“We’re expecting snow to spread across much of central and eastern Iowa, especially by late this afternoon and into the overnight hours,” Donavon says. “Right now, the highest accumulations do appear to be east of Interstate 35 where we could have a few accumulations of 1-2 inches possible, mainly on grassy areas. There could be a short period where it does accumulate on the concrete.”

That 1-2 inch range extends from as far south as Lamoni to Ottumwa, north into the Cedar Rapids area and northeast as far as Decorah and Dubuque. Another weather pattern is expected to develop over Iowa late Wednesday bringing very cold weather and the chance for more snow into Thursday, though snowfall predictions are still fuzzy.

“Certainly, it does appear there’s going to be some snowfall associated with that across parts of Iowa,” Donavon says. “Accumulations due to some of that uncertainty are still a little bit up in the air. The main things to watch out for are, anybody going out on Beggar’s Night and especially Halloween night, bundle up and be prepared for at least light snow across parts of Iowa.”

The long-range forecast calls for temperatures to warm slightly — into the 40s — by Friday and into the weekend, with dry weather expected.