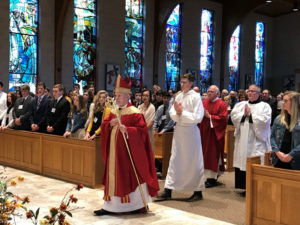 Mark Prosser working as a Deacon in the church.

After a 40-year career in law enforcement, a northwest Iowa police chief will be working full-time for the Catholic Church.

Storm Lake Police Chief Mark Prosser has been named the director of Pastoral Planning for the Diocese of Sioux City. Prosser, who is also an ordained deacon in the Catholic Church, will leave the Storm Lake Police Department on December 31, 2019. He’ll begin his new duties with the Diocese on February 3, 2020.

Prosser is a native of East St. Louis, Illinois. He’s been Storm Lake’s police chief for three decades. Prosser’s wife is managing editor of “The Catholic Globe” which is distributed to parishes in the Diocese of Sioux City.