You are here: Home / News / Idled Sioux Center ethanol plant back at 50% production 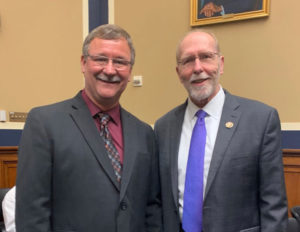 A northwest Iowa ethanol plant that was idled in mid-September has resumed production, due to action in California.

Kelly Nieuwenhuis, a farmer from Primghar, is president of farmer-owned Siouxland Energy in Sioux Center.

“The State of California is using a significant amount of ethanol to meet its requirements under the low-carbon fuel standard and CARB lowered our plant’s carbon score by roughly 10%, giving us a new market opportunity,” Nieuwenhuis said yesterday. “As a result, now we’re back on line and operating at 50% capacity.”

CARB stands for the California Air Resources Board which regulates emissions to reduce pollution that causes smog and other air quality problems. Nieuwenhuis testified at a congressional hearing yesterday about the Sioux Center plant’s temporary shutdown — and its recent re-start.

“This small boost came directly from California, not the EPA,” Nieuwenhuis said. “The regulatory attempts by the EPA give us little confidence that we will see the relief that we need.”

This past spring, the ethanol industry urged California officials to approve sales of higher ethanol blends, to reduce carbon emissions. Distillation at the Sioux Center ethanol plant started this past Saturday and fermentation started on Monday.