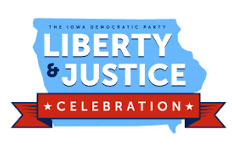 More than 13,000 people are expected at the Iowa Democratic Party’s “Liberty and Justice Celebration” this evening, by far the largest crowd ever for the annual party fundraiser.

“With so many candidates running, with so much interest in the race, we knew we were going to need a large venue,” Price said.

Wells Fargo Arena is the site for the state basketball and wrestling tournaments. The old Veterans Memorial Auditorium used to be the place for those gatherings — as well as the Democratic Party’s big fundraisers in the past.

“We wanted a venue that could kind of recreate that magic that happened at Veterans Auditorium. You have large crowds, people cheering and really showing the excitement within our party,” Price said. “…When you have all those pieces in place, it can create those break-out moments that candidates are looking for.”

Price was present for a break-out moment at the party’s fundraiser 12 years ago.

“I was a Hillary Clinton supporter in ’07 and Barack Obama was the final speaker and I remember watching him give that speech and I remember you could just feel the room change. You could feel the energy change. You could feel the excitement. For the first time in a lot of people’s eyes, he looked like a president and you could just tell the Caucuses changed that moment,” Price told Radio Iowa. “You know, we’re hoping we can have some of those moments again.”

More than 200 people have filed the federal paperwork to set up a presidential campaign, so Iowa Democrats established criteria for speaking spots in tonight’s program. Fourteen of the party’s presidential candidates met the benchmarks of buying the party’s voter list, having at least two campaign offices in the state and ten staff based here.