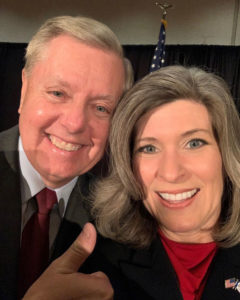 Sen. Ernst posted a selfie she took with Sen. Graham on Twitter.

A South Carolina senator who has become one of President Trump’s key allies told about 500 Iowa Republicans tonight that impeachment will backfire on Democrats.

“What’s going on in the House today is a joke,” Graham said. “…This is a war and it’s a war worth fighting, so here’s what I think: I think impeachment is going to blow up in their face,” Graham said, to cheers and applause, before adding this punch line: “And Trump told me: ‘I didn’t do no quid pro quo. I don’t even speak Latin.'”

That was one of many Graham quips that drew laughter during his half-hour-long speech.

Graham began by talking about his own rocky start with Trump, who Graham said was unlike any politicians of his lifetime.

“Now, he’s a handful,” Graham said and many in the crowd laughed, then Graham continued. “I’d rather deal with him being a handful than them running my country, all right?”

Graham urged Iowa farmers to “hang in there” as Trump negotiates with China and Graham promised that Trump — if given a second term — would work with Republican senators to “fill the court with conservatives as far as the eye can see.”

Iowa’s two U.S. Senators also spoke at the event. Joni Ernst told the crowd about a recent conversation she had with Trump about the Renewable Fuels Standard.

“He is really great to work with folks and I cannot overstate that enough,” Ernst said. “…This is the most accessible president we have ever had in United States history. God bless you, Donald J. Trump.”

Senator Chuck Grassley told the crowd Trump is following through on his 2016 campaign promises and that may reduce the cynacism among grassroots Americans.

Iowa GOP chairman Jeff Kaufmann began the evening by blasting the Democrats who are running for president, especially those who have called for ending the Electoral College, which he said would make Iowa ‘”fly-over country” in future presidential races.