You are here: Home / News / Race for Mayor in Elk Run Heights could be decided by a drawing 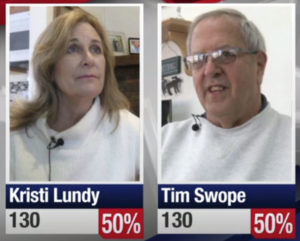 The luck of the draw may end up deciding the winner of an eastern Iowa mayoral race.

The two top candidates for the office in Elk Run Heights, incumbent Tim Swope, and challenger Kristi Lundy, are tied at 130 votes following Tuesday’s election. Black Hawk County auditor Grant Veeder says there is one absentee ballot his office is still waiting to receive — and if it arrives before noon on Tuesday — it could be the deciding vote.

The Black Hawk County Board of Supervisors will certify the results of the election Tuesday and if it remains a tie — then Veeder tells KCRG TV-9 they will put the names of the candidates in a hat and pull one out at random. Whoever’s name gets picked becomes the next mayor.

“This is just like adding one more vote but it is totally random,” Veeder says. Picking a name out of a hat may seem like a quirky way to appoint someone to the higher office but it’s a move required by law. He reads from the code: “The name of each such candidate shall be written on separate pieces of paper as nearly uniform in size as possible, and placed in a receptacle so that the names cannot be seen.”

Lundy says it shows that every vote counts. She was passing the time by baking cookies and looking towards a higher power.
“I’ve been saying my prayers and have a lot of supporters that are saying their prayers also,” Lundy says. Swope tells KCRG TV-9 says there’s nothing to do but wait. “You can’t change anything, it’s all out of my control, out of her control,” Swope says.

The draw to select the winner is not the final step. Both candidates have three days to request a recount which could yet again change the results of the election. It’s something both Lundy and Swope say they are already considering.

A three-person board where each candidate picks one person and they then have to mutually agree on the third person would reviews the votes. The board will then have 18 days to file a report.