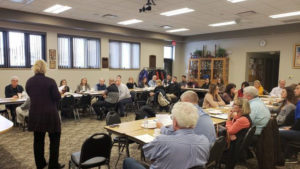 Northeast Iowa’s Delaware County is the pick for a pilot project to boost the rural workforce through an initiative from the Iowa Workforce Innovation Network team, known as i-WIN.

Working with the Iowa State University Center for Industrial Research and Services, or CIRAS, officials met in Manchester this week with local business and community leaders. Team member Camille Sloan Schroeder says they considered several places to serve as the pilot, but ultimately chose Delaware County.

“What we were looking for is, we were really looking at rural workforce,” she says. “So, we wanted communities that were within a certain population that were situated within commuting distance from a metropolitan area and that would really be engaged and situated to be engaged.”

Sloan Schroeder says they’ll be working with Delaware County leaders on how to grow the workforce instead of focusing just on the small number of people who are unemployed. She says that includes looking at part-time workers who could become full-time, recruiting more young people and bringing back people who commute out of the county.  “We will be working with Manchester over at least the next six months on developing a workforce plan that’s very specific on what is already happening in the county and in the community,” Sloan Schroeder says, “but also what areas could there be this potential for what we call a virtual workforce.”

Delaware County Economic Development director Donna Boss says it’s exciting to be chosen as the sole county in Iowa for the pilot program.  Boss says, “We would be foolish not to go forward with the selection process of this extensive research data that Iowa State CIRAS is going to be conducting over the next six months to a year of how this is going to assist workforce in all of our sectors.”

Boss says they’ll send out surveys to many of the business and community leaders in Delaware County over the next week or two as the workforce pilot program gets underway.