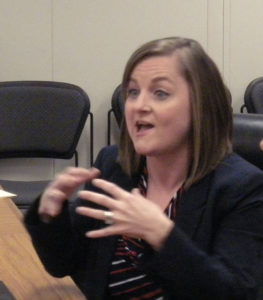 Nicole Proesch explains rule changes to the Board of Education.

The state Board of Education is seeking input on a rule that would end the so-called double jeopardy for students who fail a class.

“So what happens is a student will sit in a sport, and then they also have to sit in speech — because the speech rules mirror our rules. And so, they end up serving two periods of ineligibility in two different activities. It’s really been a concern for legislators because they think student is being double punished,” according to Proesch.

Lawmakers attempted to change the rules in February of this year — but they bill did not pass. Proesch says the revised rules for sports would not require the double sit out periods. “Whatever thing you sit in first is the one thing that you’re going to sit our for,” Proesch says. “And then if something comes later — like three weeks later you are in another sport or activity — you are not going to sit another 30 days in that. If that makes sense.”

Board member Mike May of Spirit Lake asked about students trying to get around the suspension in a sport by joining an activity. May asked if he could join the dance team and serve his ineligibility that way. Proesch joked that May probably wouldn’t make the dance team. But went on to say that people are already trying to get around the rules. She says it seems more important to not double punish a student who had a bad grade. “Parents will tell you people play games with the rules all the time. So, trying to make it so kids aren’t double punished — I guess I would tell you to try and think about the effort of that rule and why we are doing it — and try not to worry about the few people who are trying to skirt around the rule,” Proesch says.

The rules would also create a dead period of 14 days for school sports.”This was brought to our attention by the athletic associations,” Proesch says. “They’ve had lots of conversations with athletic directors around the state and lots of discussions about wanting to have a dead period during the summer, so that students have a time period during the summer where they are not required to do anything for sports.”

Proesch says the discussion has centered on what is best for the students. “We’ve heard some concerns that this is going to allow club sports to try and fill in the gap. But we also are trying to make it easy for parents to take their kids on vacation and to have a period where they know they are not going to be missing things or it’s going to be held against them if they’re not at sports practice during the summer times,” according to Proesch.

The Board of Education will take public comments and then hold a hearing on the proposals on January 7th.