You are here: Home / Crime / Courts / Two arrested after standoff with deputies in Farragut 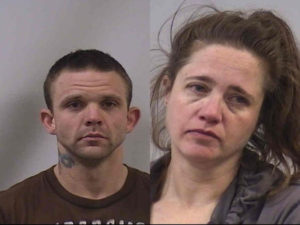 Two people are in custody after a standoff in the southwest Iowa town of Farragut.

The Fremont County Sheriff’s Office says deputies were notified Thursday evening that a man wanted out of Marshalltown was hiding inside a residence in Farragut. Deputies and a dog forced entry into the home, causing both suspects to surrender.

Deputies arrested 30-year-old Jonathan Lee Million of Marshalltown on an outstanding warrant. He was also charged with interference with official acts, fourth-degree theft and two counts of possession of a weapon by a felon. Another person in the house — 43-year-old Lisa Ann Costello of Farragut — was arrested on charges of accessory of a felony after the fact, possession of methamphetamine and possession of drug paraphernalia.

Deputies say they located several stolen items in the house, plus a loaded firearm that had been reported stolen. More charges are pending.