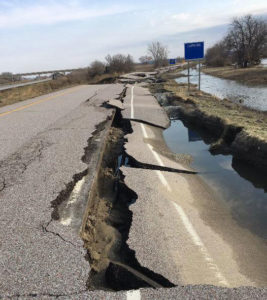 Due to year-end budget constraints, some road repair crews are having to stop working on flood-damaged highways in southwest Iowa.

While water remains in parts of Fremont County closest to the Missouri River, retreating floodwaters have wreaked havoc on the county’s secondary roads.

County Engineer Dan Davis says the county has started making repairs, but funding remains an issue.
“It’s just been very slow,” Davis says. “We’ve done a few contract repairs on FEMA projects. Our crews have done a lot of repairs with local funds. By the end of September, we were over 50% of our budget, which shouldn’t happen until December, so we had to cut some of that off.”

Davis says his department remains in a holding pattern on major repairs until the county’s coffers are replenished by the federal government for work that’s already been done. “Now, we’re in the waiting mode of getting reimbursed by FEMA for those projects that were either contracted done or that our crews did,” he says. In the meantime, Davis says his crews have worked to keep up with regular maintenance on other county roads so the problem isn’t compounded next spring.

“We’re still doing some patching to finish up the year and the weather’s cooperating,” Davis says. “Hopefully, we’ll get that completed and we’ll try to get as much open as we can this year until the weather changes. Then, we’ll hit it in the spring and hopefully we’ll be back caught up with our reimbursements is the big thing.”

ounty officials recently closed J-10 or Waubonsie Avenue between Bartlett and the Loess Hills following its collapse due to undermining from floodwaters and repeated heavy equipment usage for levee repairs.