You are here: Home / Agriculture / Number of turkey producers in Iowa has increased 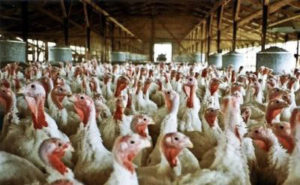 The Executive Director of the Iowa Turkey Federation, Gretta Irwin, says the state’s seen an increase in turkey producers in recent years.

Iowa now has about 130 turkey farms with the majority of them comprised of second- and third-generation turkey farmers.
“We have been in the top ten for many years and we have been number-eight for a lot of years but we are now number-seven in turkey production in the U.S.” Irwin says. “That change has happened because we’re adding family farms to our business. We’re seeing a lot more families raising turkeys, especially in northwest Iowa.”

The southeast and central regions of Iowa are also big on turkey production. In addition, Iowa is a national leader in turkey processing, now ranking fifth in the country. “Processors in Iowa are busy all year long making further processed turkey products,” Irwin says. “If you go into a Subway, if you go to a Jimmy John’s and order a turkey sandwich, that’s Iowa turkey. You go into a grocery store and buy a lot of the turkey sausage and those convenient products, those are likely to come from Iowa as well.”

While most of us will be thinking about big turkey dinners over the next few days in particular, Irwin says turkey is big business 365 days a year. “All year long, it’s busy in Iowa raising and processing turkeys and really adding value to our local communities,” Irwin says, “taking the bushel of corn and third of a bushel of soybeans and feeding it to the turkeys and having a great, healthy protein for us to enjoy at Thanksgiving and all year long.”

Iowa’s turkey farms raise about 12 million birds every year. She adds, turkeys are indigenous to the continent. Fossils have proven wild turkeys have lived in North America for more than ten-million years.