You are here: Home / Human Interest / Thanksgiving meal is for family and friends, not an Instagram moment 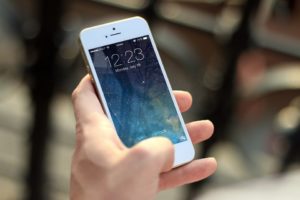 Smart phones and politics are two things Iowans should not bring to the Thanksgiving table today.

A national survey conducted by a West Des Moines branding and marketing agency finds certain topics should remain off-limits, and electronic gadgets should be switched off.

Doug Jeske, president of Meyocks, says the survey found Thanksgiving is a time for family, not Facebook.

“About 70% of Americans say they find the use of mobile phones and other devices at the Thanksgiving table annoying,” Jeske says, “yet 43% still allow it and about a third of us admit to using or checking our smartphones ourselves.”

It’s suggested the Thanksgiving dinner hosts make a rule before the feast begins that anyone caught using their phone during the meal has to wash all of the dishes.

“I think that would be a great idea,” Jeske says. “We as Americans profess to wanting to be with our families at Thanksgiving yet some of us find ways to disconnect from them when we’re together. Maybe if there was a disincentive of having to help with cleanup, it might keep us focused on the conversation at hand.”

It’s long been said that polite conversation should not include politics or religion. The survey found politics is declining as a popular topic on Turkey Day.

“Four years ago, one in four Americans said that politics typically came up at the Thanksgiving table,” Jeske says. “This year, it’s down to one in six. We’re a little divided as a nation, perhaps a lot divided, so it’s easier to talk about the good things that are going on or how good mom’s pecan pie is, rather than talk about things like impeachment.”

As for religion, one in five of those surveyed say they never say a prayer at the Thanksgiving table. That’s up slightly from 17% in 2016.

While mashed potatoes, pumpkin pie and cranberry sauce remain a constant on the Thanksgiving menu, the latest survey found one change from tradition.

“Turkey still dominates as a Thanksgiving dinner item, but mac and cheese, for the first time since we’ve been doing the survey, made the top ten list of dishes,” Jeske says. “It looks like it displaced boxed stuffing from last year’s results.”

Three in ten Americans say macaroni and cheese is typically served as their primary Thanksgiving meal. Also this year, nearly one in five surveyed say they’ll have groceries delivered for Thanksgiving.