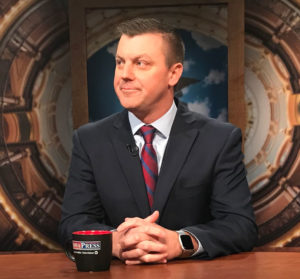 The top Republican in the Iowa Senate says GOP lawmakers are considering a tax package that may raise the state sale one percent, with part of the money financing water quality efforts and the rest used to replace taxes that are cut.

“As long as we’ve in the majority in the Iowa Senate and as long I’m leader of the Iowa Senate, we’re going to work on reducing taxes for Iowans. How that works and what those major reforms look like, there are still a lot of details to be worked out,” says Senate Majority Leader Jack Whitver, a Republican from Ankeny..

Whitver says, in general terms, want to cut income taxes, property taxes and corporate taxes. That conversation is now merged with discussion of raising the sales tax. In 2010, Iowa voters approved a new state natural resources fund — to be filled with the first three-eights of a cent of any future sales tax increase.

“There is conversation about it, but again it’s really important for me to get across that anything that we do on taxes is going to be a tax reduction — overall — for Iowans,” Whitver says.

The preference of Senate Republicans would be to cut income taxes to offset the sales tax increase, according to Whitver.

“We have to be very careful because we’re in the bottom 15 as far as property taxes in the country. We’re in the bottom 15 as far as income tax and if we raise the sales tax, now we’re one of the worst on sales tax as well. That’s a trifecta we don’t really want to hit,” Whitver says. “Whenever you’re going to look at changing the sales tax, we have to reduce taxes somewhere else.”

Republican lawmakers passed a significant income tax reduction in 2018, but it’s not fully phased in yet. Whitver made his comments during taping of “Iowa Press” which airs tonight on Iowa Public Television.