You are here: Home / News / Warren and Sanders focus on influence of money in politics 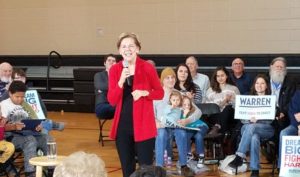 Massachusetts Senator Elizabeth Warren and Vermont Senator Bernie Sanders nearly crossed paths in Ottumwa today, but the two competitors for the Democratic Party’s 2020 presidential nomination steered clear of conflict with one another.

At a town hall forum this afternoon in Ottumwa, Warren declined to compare herself with Sanders and she did the same when speaking with reporters.

“Bernie and I have been friends for a long, long time and we fight for the same things,” Warren said. “We have differences, but we’ve been fighting alongside one another for a long time.”

Sanders, who spoke at an event in Ottumwa tonight, railed against what he often refers to as “the billionaire class.”

“We want a democracy where there is a clash of ideas,” Sanders said, “and not big money buying elections.”

“Mike Bloomberg drops in and spends $100 million on TV ads. This is more than has ever been spent in the history of the universe, right?” Warren said. “He spends this money and he’s got — what is it? — four points in the polls, five points in the polls in no time at all.”

Warren accused Bloomberg of skipping what she called “the democracy part” of seeking the presidency.

“Don’t come to Iowa and hear about your concerns, right? Don’t go to New Hampshire and shake hands with people. Don’t go down to South Carolina or Nevada,” Warren said. “He just thinks he’s going to be able to buy this.”

While Sanders did not name Bloomberg, he argued the current campaign finance system gives any “multi-millionaire” who runs for president an immediate advantage.

“You’d be a very important person no matter whether you accomplished anything or not and that’s because you have the money to buy TV ads and to be consequential,” Sanders said. “I don’t think that’s the democracy we want.” 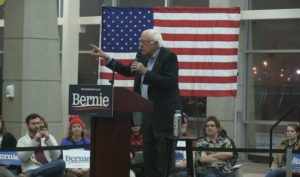 This morning, Sanders visited the practice facility used by the Burlington Bees Minor League Baseball team. Representatives of the Clinton LumberKings and Quad City River Bandits were there, too, to talk about a proposal that would end Major League Baseball’s association with the three Midwest League teams. Warren will continue campaigning in southeast Iowa tomorrow.

Entrepreneur Andrew Yang wrapped up a five-day bus tour of the state with a Saturday night rally in Iowa City.

“You can’t escape the ads. I apologize,” Yang said shortly after taking the stage, laughing. “I’m one of the worse offenders. You know that. I’m right there in the middle — in the acceptable range.”

Yang is one of the seven candidates who’s qualified to appear in Thursday night’s televised debate. California billionaire Tom Steyer, who has also met the polling and fundraising criteria to participate in Thursday’s debate, campaigned in Iowa City today. He’ll speak Monday in Muscatine about the economy.