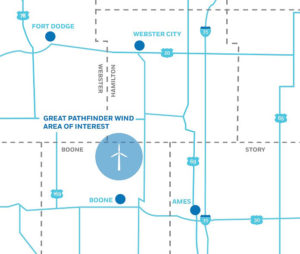 A Virginia-based company is announcing plans to build up to 85 wind turbines in central Iowa starting next year.

Holly McCoy-Nelson, spokeswoman for Apex Clean Energy, says the development will be called the Great Pathfinder Wind Project. “We are working towards having a buildable project in Boone and Hamilton counties,” McCoy-Nelson says. “They’re in the Stratford area and south, and then north of Boone.”

The process is slow going and McCoy-Nelson says they’re working to apply to get energy onto the grid. “We’ve had some delays with that but we would hope to permit this in Boone County, where they have zoning and a permit process, in the first quarter of 2020,” she says. Apex is working with landowners, community leaders and various stakeholders on the project, which McCoy-

Nelson says would provide energy for 78,000 homes. “They’ll start some of the construction in 2021,” she says, “and then may have to finish in 2022 depending on whether we can get our power out and onto the grid.” Apex says the construction project would create up to 200 jobs with another 15 to 20 full-time local jobs for operation and maintenance of the wind farm.

The county to the east of Hamilton County is Hardin County, where county supervisors voted unanimously last week to pass an indefinite moratorium on wind turbine building permits. In southwest Iowa, Madison County leaders passed a similar ban in October.