You are here: Home / Outdoors / Studies continue on the mudpuppy in the Mississippi 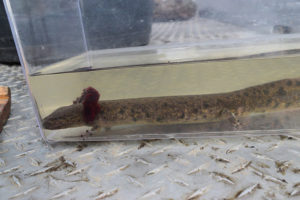 A study is underway to learn more about a slimy creature that lives in some of the state’s waterways.

Iowa DNR fisheries technician, Kevin Hanson, has been running his flat-bottomed boat along the Mississippi River to study the mudpuppy. “It’s Iowa’s largest salamander species and they are actually listed as a threatened species in Iowa. There’s not a lot of records of them in western Iowa — but we have them along the Mississippi and there are records of them in some of our major interior rivers,” Hanson says.

Studying the mudpuppy requires setting traps and at times breaking through the ice on the river to collect and record information on them. “The amazing thing about mudpuppies is that every other reptile and amphibian is shut down this time of year. But this is actually the time when they are actively feed and breeding,” Hanson says. He says the breeding is going on, but the female won’t actually lay her eggs until May or June.

This mud puppy population study began in 2015, but its origins reach back to the reclamation project from the 2008 Bluff Slough train derailment south of Guttenberg after a dead juvenile mudpuppy was discovered during cleanup. Hanson says part of the reclamation fund from the derailment cleanup has been used to try and get a better handle on the creature.

“Parts of our area like the Bluff Slough area where the derailment happened — we are not getting as many mudpuppies as some of the other areas,” according to Hanson. “But part of the area it does look like from what we’re getting from our data a pretty strong population.”

Hanson says they get reports of mudpuppy sightings from those who fish on the river, but this study gives them a better count. He says they go after the fishing bait and can cause some angst if caught. “They are an amazingly agile little animal and very slimey,” Hanson says. “And when people catch them they can wriggle quite a bit. People have been kind of intimidated by them thinking they are poisonous, and they are just odd looking. But they are really just a harmless animal and an amazing animal to study.”

Hanson has tagged 175 individual mudpuppies and recaptured 50, some more than once. The mud puppies can live about 20 years in the wild and can grow up to 18 inches long or longer.