You are here: Home / Sports / University of Iowa to honor Hayden Fry at Holiday Bowl 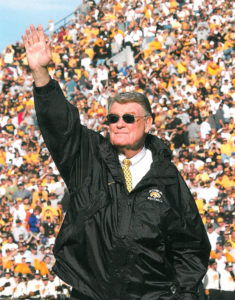 The University of Iowa announced the Tigerhawk logos will be removed from the helmets of players for the Holiday Bowl Friday in honor of former coach Hayden Fry.

Fry, who created the Tigerhawk logo when he took over at the school, died December 17th at the age of 90. It is the third time both Tigerhawks have been removed from the helmet for a football game.

The first was November 2nd, 1991, the day after six people were killed in a shooting on the U-I campus. The second was the 1996 Alamo Bowl, when Diane Mitchell, the mother of Iowa linebacker Mark Mitchell, was killed in a car crash on the way to the game.

The helmets will include a decal honoring former U-I Athletic Director Bump Elliott. Elliott was athletic director from 1970-91. He died December 7, 2019 at the age of 94.  Elliott hired Fry, and are both members of the College Football Hall of Fame. Fry is a member of the Holiday Bowl Hall of Fame.

Head coach Kirk Ferentz has this comment:
“We have had two big losses in the past month, so we are going to recognize Coach Elliott with a sticker on the back of our helmet that will say “Bump” on it. That was in the works a couple weeks ago. Then with Coach Fry passing last week, (we) talked to the family and I think we’re all in agreement that it will be a really nice thing to take the Tigerhawks off of the helmets on both sides. A precedent was set. He did that twice during his time and (the idea) was well received by his children. That is our plan right now. Next year we’ll do a commemorative patch. I think it’s really appropriate the governor requested the flags fly at half-staff this last week. It is a big loss for everybody in the state of Iowa and we’ll do all we can to respect that.”