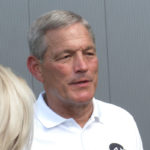 Iowa coach Kirk Ferentz says USC always has talent and this year is no different. The 16th ranked Hawkeyes play the 22nd ranked Trojans Friday night in the Holiday Bowl.

USC is 8-4 after winning six of its final seven games to close the regular season.

“We don’t recruit in the same neighborhood”, said Iowa coach Kirk Ferentz. “Typically they have elite players and they have a freshman quarterback that stepped in and did a great job and they have great receivers. We are going to have our work cut out for us that is for sure.”

The Trojans are 8-4 and won five the of their last six games with a roster dominated by freshmen and sophomores.

The Hawkeyes are 9-3 and will be in search of their third straight bowl win.