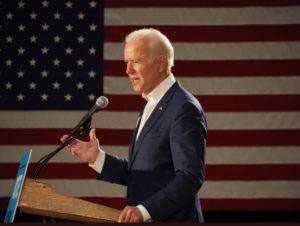 Joe Biden speaks at a Finkenauer rally in 2018.

Finkenauer worked on Biden’s 2008 campaign. Biden returned the favor in 2018 and headlined a huge rally for Finkenauer in Cedar Rapids just days before the General Election.

“I understand Abby because I came from the same kind of home,” Biden said. “…Growing up, believing there wasn’t a damn thing I couldn’t do — because that’s what my parents told me.”

Biden mentioned that he had been elected to the U.S. Senate when he was 29 — the same age Finkenauer was on the eve of the 2018 election.

Biden and Finkenauer will campaign together in her congressional district tomorrow, with stops in Dubuque, Cedar Rapids and Independence. Finkenauer issued a written statement today, saying Biden’s “character, record, and commitment to rebuilding the backbone of the country — the middle class — is what Iowa and this country needs.”

Cindy Axne of West Des Moines and Dave Loebsack of Iowa City — the other Democrats from Iowa who serve in the U.S. House — have not endorsed a presidential candidate. Of the three Democrats who hold statewide wide, State Treasurer Mike Fitzgerald has endorsed Elizabeth Warren. Iowa Attorney General Tom Miller had been backing Montana Governor Steve Bullock, who dropped out of the race. State Auditor Rob Sand, in his first term in office, has not endorsed a candidate.