You are here: Home / Fires/Accidents/Disasters / Another close call leads to another DNR warning about caution on ice 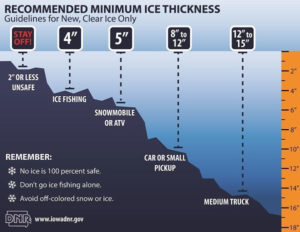 Bill Spece, a conservation officer with the Iowa Department of Natural Resources, says the experience on Thursday near Duncombe should serve as a lesson for every Iowan who may be venturing out onto a frozen lake.

“A couple of gentlemen were leaving the ice after an afternoon of ice fishing and fortunately, they were not walking close to one another and one went through the ice,” Spece says. “The other gentleman, quick to think, dumped out his sled and was able to push it out and the other guy was able to get a hold of it and his friend was able to help him to safety.”

While the ice may appear to be safe and thick enough for people to walk on, with the rollercoaster of temperatures lately, ice conditions are deteriorating across Iowa.  “No ice is safe ice because there’s so many varying factors with the thickness,” Spece says. “Especially at Brushy Creek where it’s fed by the creek itself. There’s a lot of warm water coming in there from tiles and from other smaller streams so it’s really hard to get a good base layer of ice on there when we have a year like this.”

Large areas of northern and central Iowa got snow late last week, which makes it impossible to see the ice below. Before setting foot onto an iced-over lake, Spece says to take all precautions, be aware of the weather conditions and pay attention to all posted signs and flags.

“Unless we see a week of highs in the teens, we’re not going to have good ice conditions for probably quite some time here,” Spece says, “especially in central Iowa where we’ve been seeing and experiencing these warmer temperatures.” Ice fishing is a social activity, he says, so don’t go out alone. If the worst should happen, someone would be there to call for help or to enact a rescue. He suggests ice anglers carry the following: ice picks, 50 feet of rope, and a throwable floatation seat cushion.