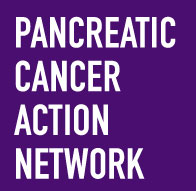 The five-year survival rate for pancreatic cancer was raised this week from nine to ten-percent.

While that still means a devastating 9 out of 10 people who are diagnosed with that form of cancer won’t beat it, the single-percentage uptick represents significant progress. Pam Anderson is one of the rare Iowa survivors, who volunteers with the Des Moines affiliate of the Pancreatic Cancer Action Network.

“I was diagnosed with pancreatic cancer in July of 2015,” Anderson says. “At that point in time, my survival rate to five years was six-percent. Our goal was to double that by 2020. We’ve made it to ten-percent. We’re thrilled to be there.” The survival rate for pancreatic cancer remains the lowest of all cancers, but reaching the ten-percent milestone is quite encouraging, according to Anderson. She says it demonstrates that awareness is rising, in addition to more donations bringing promising research — and people in her circle are overjoyed.

“Oh, we are,” she says, laughing. “I got the message and I sent emails to all my friends saying, ‘Yay, we got to ten percent!’ I was so excited when this came out because it’s been hanging at nine-percent for years. We’ve had a lot of push to raise a lot of money to get to that point but there’s still a lot of work to do.” 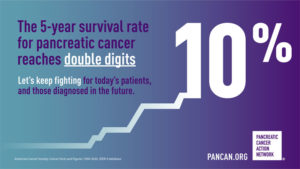 Knowing she’s among the very fortunate few, Anderson says being a pancreatic cancer survivor has granted her a new perspective.

“I really have spent a lot of time thinking about when I first was diagnosed,” Anderson says. “I had a grandson who was playing in a state baseball tournament. I thought, ‘Is this going to be my last baseball tournament? Am I not going to be here for this event or that event?’ I live better now. I pay attention to the fun things in life and enjoy every minute now.”

The fast-moving disease is difficult to diagnose because the symptoms can be vague and are often ignored until it’s too late. They include abdominal pain and back pain, changes in stool, yellowing skin, weight loss, appetite loss, and a feeling of being full after only eating a little food.