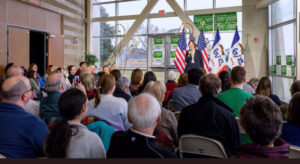 “I never thought I was going to be number one from day one. I didn’t have the biggest name ID…I never ran for president before, but what I brought to this race was grit,” Klobuchar said recently in southeast Iowa. “And I will tell you one this, with only six people on the debate stage, I am still standing.”

Klobuchar spent this past weekend campaigning in the state. During an appearance in Ottumwa, she noted rival Bernie Sanders had cancelled two events due to the weather.

“Amy Klobuchar never cancels anything,” she said, to applause and laughter from the crowd, “…given that I announced (my presidential campaign) in the middle of a blizzard with four inches of snow on my head.”

Tonight’s debate is co-sponsored by The Des Moines Register and will be broadcast on CNN, starting at eight o’clock Iowa time. It’s scheduled to last two hours.