You are here: Home / News / Senator Ernst talks about USMCA and impeachment trial 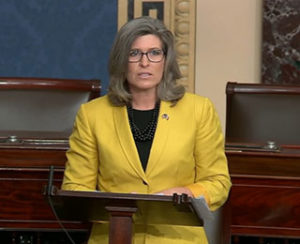 Iowa Senator Joni Ernst, a Republican from Red Oak, says this is a vital pact with our neighbors to the north and south and promises a tremendous boost for the Iowa economy. Ernst says, “Our farmers, manufacturers and small business owners need certainty and predictability and getting this deal done with our top two trading partners, Mexico and Canada, gives them exactly that.”

Iowa is the nation’s number-one pork producer, and in 2018, Canada and Mexico bought more than 40-percent of all U.S. pork exports. Iowa is also the country’s number-one egg producer and the USMCA will raise U.S. exports of poultry and eggs to Canada alone by $207 million

“This is a huge, long-awaited, wonderful arrival for Iowa,” Ernst says. “Iowa exports more to Canada and Mexico than we do to our next 27 trade partners combined. This is a big deal.” A report from the U.S. International Trade Commission says the USMCA will raise the nation’s gross domestic product by more than $68 billion dollars and will create nearly 176,000 jobs, while boosting farm and food exports by at least $2.2 billion. Ernst says, “The USMCA is truly a win for everyone, especially my fellow Iowans.”

On another topic, Ernst says she’ll take her seat at the impeachment trial proceedings and do as required as an impartial juror, but she’s not overjoyed by the process.

“A lot of us do see it as a political exercise,” Ernst says. “When you can go back and look at the number of House Democrats who, before he was even sworn into office, stated that they were going to impeach President Trump.” The two articles of impeachment were passed in the U.S. House on December 18th, but since then, Ernst notes how House Speaker Nancy Pelosi, a Democrat, has delayed sending the articles to the Senate.

“Just as we observed the rush to get things done in the House and then, wow, I guess it really wasn’t that urgent because they’ve been sitting on those darn articles for over a month,” Ernst says. “The whole process has really been odd or unusual or bizarre.” Of herself and her fellow senator-jurors, Ernst says: “We will hear the record that has been presented by the House, all of the information they were able to put together and present with those articles of impeachment. We will be as fair as possible.”