You are here: Home / News / Women for Trump campaign across Iowa 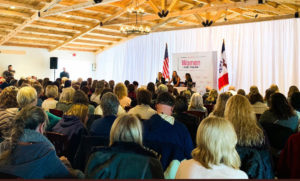 Lara Trump, who is married to Eric Trump, is a senior digital consultant to the president’s re-election campaign and she’s headlining events around the country aimed at women voters.

“When you look at things he’s done, that is helping working mom, working families all across this country,” Lara Trump said in Sioux City.

“How can you not be energized after listening to a group of women like and knowing that we’re going to win in a landslide in November?” she asked.

Republicans are aiming to spur turn-out for their caucuses next month. Stephanie Audino of Sioux City said she’s set on caucusing for Trump on February 3rd and voting for him on November 3rd.

President Trump has scheduled a rally in Des Moines on January 30th. Trump’s campaign press secretary is scheduled to host a “Women for Trump” event in Davenport later today.