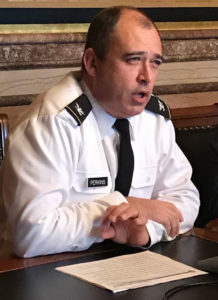 Iowa National Guard officials are asking legislators to set aside $5.5 million over the next three years for a new armory in central Iowa.

“It would be one of our traditional armories where we have a large drill floor, classroom facilities,” says Colonel John J. Perkins, the construction and facilities manager for the Iowa National Guard.

The facility had originally been planned for the south side of Des Moines, but Perkins and other Guard officials now hope to place it in West Des Moines.

Perkins made a presentation to a legislative committee today.

The Guard plans to consolidate armories once this new armory is built. The adjutant general of the Iowa National Guard has indicated “a couple” could be closed, but no decisions have been made yet. In 2015, Perkins was involved in the process of closing armories in Algona, Corning and in his hometown of Centerville.

The Iowa National Guard currently has 39 armories in the state — two-thirds of which are in metro areas. Iowa taxpayers would pay for 25 percent of construction costs of the new one that’s proposed in central Iowa.

(A previous version of this story incorrectly indicated the budget request was for a higher amount.)