You are here: Home / Education / Western Iowa Tech president says they are working with international students 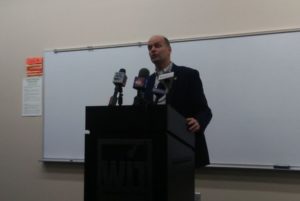 The President of Western Iowa Tech Community College in Sioux City answered questions and concerns Tuesday on the handling of a foreign exchange student internship program at the school.

President Terry Murrell says he was first made aware of concerns by around 60 students from Brazil and Chile on Monday.
“It’s become clear that there was a break down in communication regarding food and meals,” Murrell says.The students came to the college last summer on what’s called a J-1 visa program through the U-S State Department.

The Des Moines-based political action group, Iowa Citizens for Community Improvement, claimed that some of the students are being exploited. Murrell says they have tried to work with the students. “Western Iowa Tech has provided some resources — such as gift cards and access to the college’s food pantry. While there is no contractual obligation on Western Iowa Tech’s part to do so — Western Iowa Tech is in the process of ensuring that we secure food for the students during the remainder of the program,” according to Murrell.

Murrell says he knows some students were not happy with their internship jobs, but Western Iowa Tech has tried to help them.
“We have worked with them to find other positions. Where that was not possible, Western Iowa Tech Community College offered to pay for the students’ airfare to their home country,” Murrell says. “Several Western Iowa Tech students accepted the offer and returned home at no cost to them. Under no circumstances were students threatened with deportation.”

President Murrell says the college will continue the current program with the remaining students, but will reassess the initiative and not recruit or seek new international students for the J-1 Visa Program in the next year.