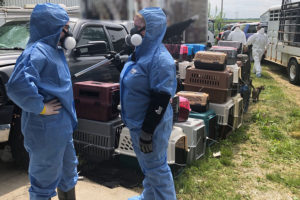 ARL removes cats from a house in Madrid in June.

The Animal Legal Defense Fund places Iowa 49th in its latest report on the worst states in the nation for its animal welfare laws for the third straight year. Iowa ranks  ahead of only Mississippi.

Colin Grace, director of legal initiatives for the Animal Rescue League of Iowa, says a bill pending before Iowa lawmakers would bring about significant and much-needed changes, especially when dealing with animal hoarding cases.

That’s why, he says, the FBI now tracks all such animal-related crimes. Iowa’s existing rules on animal neglect are too vague, Grace argues, while the proposed legislation — known as House File 737 — would lay out specifics.

“What HF-737 does is require that the living space be sanitary and free of excessive waste,” Grace says. “It requires that the animals are getting a nutritionally-appropriate quality and quantity of food, as well as potable water.” The bill passed in the Iowa House last year by a 96-to-zero vote but stalled in the Senate.

Grace says his organization is working to educate legislators about the bill’s contents. “We’ve heard that there are some senators who are worried that this bill might unduly affect agricultural interests,” Grace says. “This is a misplaced fear because our bill does not concern livestock animals and only affects the companion animals — dogs and cats — that share our homes.”