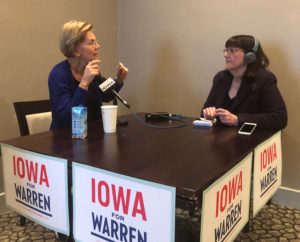 Massachusetts Senator Elizabeth Warren is counting on her detail-oriented campaign staff and volunteers to carry her across the Caucus-Night finish line.

Warren flew back to Iowa this past weekend during a break in the Senate’s impeachment trial for campaign stops in eastern Iowa. During those public events and in an interview with Radio Iowa, Warren emphasized the first bill she’d seek as president would be an “anti-corruption plan.” It calls for changing the rules for lobbyists, banning lobbyists from fundraising for political candidates. It also would require everyone who runs for public office to release their tax returns.

Warren has been telling Iowa audiences “nibbling around the edges” isn’t good enough.

“We need big ideas to inspire people to get out and caucus and get out and vote,” Warren said.

Warren, though, has reduced her closing argument to three words: don’t be afraid.

“Do we say: ‘Okay, let’s be cautious. Let’s try to figure out what the safe move here is’? Or do we say: ‘We can build a better America,'” Warren said during her Radio Iowa interview.

Warren often sees women and girls wearing “Nevertheless, She Persisted” t-shirts at her events in Iowa and she  is highlighting her gender after more than 100 women won 2018 congressional races.