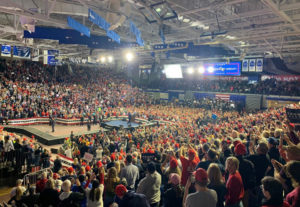 Inside the Knapp Center for the Trump rally.

President Donald Trump says re-negotiating international trade agreements was one of his top 2016 campaign promises — and tonight at a rally in Des Moines Trump touted the U.S.-Mexico-Canada Agreement he signed this week.

“You’re going to have to get bigger tractors and a helluva lot more land,” Trump said, to cheers. “You’ve got to have to produce a lot of product.”

Trump thanked Iowa farmers who’ve stuck with him, politically, as his negotiating tactics with China pushed down livestock and crop prices. He told the crowd a final, wide-ranging deal with China is imminent.

“We have never had a better relationship with China than we do right now. It’s a beautiful story. They respect us,” Trump said, to cheers. “The whole world respects us now…America is respected again.”

Vice President Mike Pence spoke to the crowd before Trump, suggesting Senate Republicans were poised to acquit Trump in the impeachment trial. Trump brought up impeachment in his speech, but gave it a verbal shrug and the crowd cheered.

After he’d been speaking for about half an hour, Trump called Governor Kim Reynolds to the microphone. It was Reynolds, rather than Trump, who reminded the crowd Iowa Republicans are holding Caucuses Monday. Trump then mentioned the lobbying effort on ethanol.

“Oh, she was driving me a little bit batty…Kim, you’d call (and say): ‘What about ethanol?’ I said: ‘Kim, I mean I’m doing a lot for that place.’ (Reynolds said): ‘No, no. We want ethanol, then we want biofuel,'” Trump told the crowd. “Then she’s asking for things I’ve never even heard of, but we got ’em all. Whatever the hell she wanted.”

Trump mentioned his announcement last June that federal rules were changed so a higher blend of ethanol — E15 — could be sold year round in every state. He did not mention the on-going controversy over the EPA’s oil refinery waivers.

The rally was held at Drake University’s Knapp Center and not all of the ticket-holders were able to enter as the fire marshal closed the arena when it reached capacity about two hours prior to Trump’s arrival on stage.