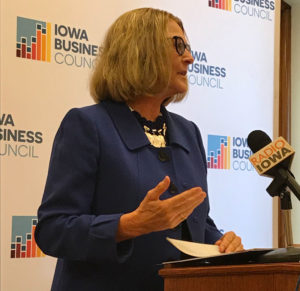 “Iowa faces a persistent shortage of available and skilled workforce and, indeed, as have been for a while we have more job openings than we have people unemployed,” she says, “so we definitely have a need to bring more people into the state.”

Vermeer manufactures heavy equipment that’s sold around the world and Andringa says 25 different languages are spoken by the company’s employees.

“We need to have immigration reform. It’s an outdated system. It’s cumbersome. I’ve got a lot of employees who have come from other countries to our country and it has taken 10 years to get their citizenship,” Andringa says. “There should be a better way.”

Andringa says Iowa’s cost of living and the short commute to work are also appealing to people who’ve moved from places like California and Portland, Oregon to work at Vermeer. During 2019, 163,000 people worked companies that are members of the Iowa Business Council — and those 23 businesses had a total payroll of $7.5 billion.