You are here: Home / Agriculture / Soybean producers return from trip to Bangladesh and Pakistan 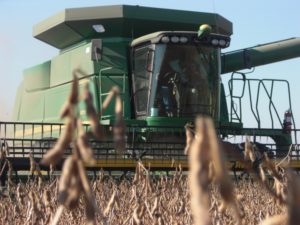 A delegation of midwest soybean producers is back in the state after a trip to Bangladesh and Pakistan promoting the commodity.

Iowa Soybean Association spokesman, Aaron Putze, says the countries have great potential. “They’re emerging markets for U.S. soy. Combined they have a population of nearly 400 million. They have an economy that’s kind of getting its legs underneath it — it’s got a long way to go,” Putze says. “With the economic advancement comes greater discretionary income. Typically when that happens, people want to eat a little bit better.”

Putze says midwest soybeans can help up the quality in their food market. “Poultry and fish are very important parts of their diet — both require feed. Soybeans are an ideal ingredient in poultry and fish feed,” he explains. Putze says the delegation learned Iowa’s soybeans and other crops from America have the edge in quality — but another factor is also an issue.

“They talked a lot about the quality of U.S. soy as compared to the competition,” according to Putze, “but as is usually the case — it often comes down to economics. And U.S. soy is always the least cost product on the market. So, they have to factor in not only the quality but the cost.”

Putze believes meeting the representatives in the other countries can help them in the long term. “It’s always most effective when you’re conversing face-to-face. That’s the importance of these trips, that’s how you build trust. And we really believe there is a future for U.S. soy in both of those countries,” he says.

Putze says overall he feels the trip was a positive one.