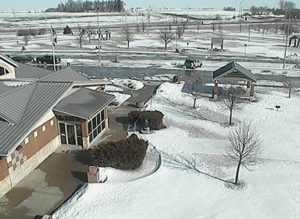 DOT camera view of I-35 rest area near Dows.

Members of the Iowa House are considering a bill that would launch another study of the 38 Interstate rest areas in Iowa.

“The point of the bill is just to take another comprehensive look that hasn’t been done for about 30 years as to the rest areas,” Representative Brian Lohse of Bondurant says, “what goes into them, where they should be, whether or not there are ones that are truly cost-effective and are continuing to operate.”

In 2018, Iowa DOT officials unveiled a proposal to gradually close 11 rest areas, which have rest rooms and close all the “parking only” rest stops — all after completing a study of usage. The bill that’s pending in the House committee calls for the Iowa DOT, the Iowa Economic Development Authority and the Iowa Finance Authority to evaluate existing rest areas and come up with a list of any necessary updates — plus offer some analysis of how the traveling public uses rest areas.

“I think they fill a necessary role, especially for truckers. They also serve a necessary role for anybody with young kids,” Lohse says, with a laugh. “They are there for a reason.”

Lohse says his kids are grown now and he makes fewer stops when traveling and he tends to patronize gas stations and restaurants
rather than pull over at a rest stop. In 2018, state officials estimated 15.5 million interstate travelers stopped at an Iowa rest area.

Here’s the list of 38 Interstate rest areas in Iowa.