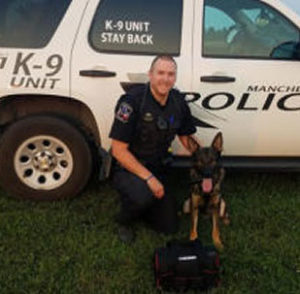 Two Manchester police officers are resigning out of just ten officers in that northeast Iowa community, forcing the department to abandon its police dog program, at least temporarily.

Police Chief Jim Hauschild says Manchester has had a police dog program for 20 years and the animals have been a huge benefit to the town and the surrounding area. “They are obviously huge PR tools for the police department as everybody loves dogs, especially when you’ve got one you can pet and see and get up close to,” Hauschild says. “Other ways they benefit us, we’ve used them to track suspects, they’ve found everything from lost jewelry to discarded evidence. Primarily, we’ve used them for drug detection in houses and vehicles, stuff like that.”

The dogs have also been called into service in Delaware, Clayton and Buchanan counties. The chief says the current K-9 officer, David Trumblee, is leaving and he’s taking the dog, Ace, with him.

“We have an agreement with all of our handlers that if they are to leave or if they are let go, they have the first option to buy the dog because they are truly a team,” Hauschild says, “and it’s hard to develop a new team once they’ve created that bond.”

Hauschild says Trumblee will pay the city $10,000 to buy Ace and keep him as a family pet. Their last day with the Manchester PD will be February 29th. Another officer is resigning as well and Hauschild says it may be some time before a canine is a part of the department again.

“The most important thing right now is to get our department built back up to ten officers that are functioning and working well together as a team and then we’ll take a look at the K-9 program,” Hauschild says. “I can’t say when that’s going to be. It might be six months, it might be a year, it might be two years, I don’t know, but I have every intention of bringing it back.”