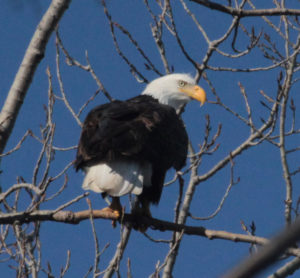 An expert says far fewer bald eagles are spending the winter along an 80-mile stretch of the Mississippi River between eastern Iowa and western Illinois.

“Then, the last ten years, from 2010 through 2019, that number dropped from almost 2,500 per year down to 1,400 per year,” McKay says. “That’s a decline of almost 1,100 birds per year in terms of averages.” More eagles are wintering inland, which McKay says is being misinterpreted.

“People think it’s a good sign because we’re seeing eagles in places we never saw them before and that must mean there are so many more eagles,” McKay says. “To me, that’s not necessarily a good sign. Bald eagles are a fish eagle. They should be tied to the river systems. That’s where they’re supposed to be and if they’re going inland, away from the riverways, there’s a reason for that.”

McKay says the drop may be due to a dwindling food supply. Bald eagles mainly eat a fish called gizzard shad. Eagles didn’t roost in large numbers along the Mississippi this year because of a lack of ice on the river, which may have contributed to the lack of gizzard shad.

The Hampton ornithologist says he’s also concerned that the number of immature or young bald eagles was lower this year. Over the last 20 years, McKay says the percentage of immature eagles he’s counted averaged 38%. This year it was only 25%.