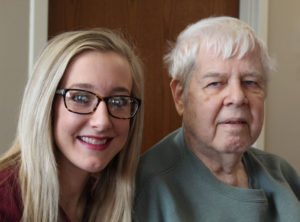 February has an extra day this year as it does every four years and that creates some unusual situations for those born as Leap Year babies.

The Good Samaritan Society of Le Mars has two people that will celebrate their birthdays this Saturday February 29th. Certified Nurse Assistant Andrea Sitzmann celebrates her seventh Leap Day birthday and resident Bob Lauman will celebrate his 20th. Sitzmann says being a Leap Year baby was tougher when she was younger.

“I was bummed out about because you only got a birthday every four years, and you got excited about your birthday every year. And sometimes at school they wouldn’t recognize my birthday because I didn’t have one on the calendar,” according to Sitzmann. “But nowadays it doesn’t really bother me anymore — I think it is kind of unique — and I use it as a special thing about me.” Sitzmann says it has led to a lot of kidding.

“When I turned 21 and I presented my ID and they thought it was a fake ID actually at first, because they said ‘there’s not way you were born on Leap Year,'” she says. “That was kind of crazy, they made me bring in a second form of identification. So, I’ve been questioned a couple of times about my Leap Year birthday.” Sitzmann says she celebrates her birthday on the 28th in regular years.

Bob Lauman says his family, which consisted of ten children, didn’t do a lot of celebrating. Lauman will technically turn only 20 Saturday — which is still under the legal age — but he wants one thing for his birthday. “Well, tell you what, If I could get a beer,” Lauman says. Sitzmann says its special to find out someone where she works is also a Leap Year baby, and she will celebrate with Lauman.