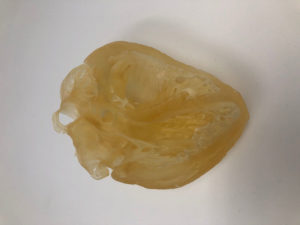 A heart made with the 3-D printer.

An Iowa City lab which uses a 3-D printer to make anatomically correct models of body parts for doctors got its start in helping turn the ideas and dreams of entrepreneurs into reality. Neil Quellhorst of Protostudios says the University of Iowa lab is an economic development organization.

“Our charter is to help anybody in the state make a demonstrable prototype of their thing. We don’t care what it is– it just has to be a thing — and it has to be a commercial venture. We are not trying to fix your kid’s toy,” Quellhorst explains.  He says they’ve seen a lot of ideas, including some that are just pieces of cardboard taped together.

“We did a musical instrument for a music teacher there in Des Moines. We did an applicator for another young woman,” he says.  Quellhorst is the director of prototype engineering at the University of Iowa. He says the medical industry has used them heavily with many things.  That includes the doctors who use a non-surgical technique for curing clubfoot — the world’s most common skeletal birth defect. They wanted a new bar device to use in treatment.

“And so they came to us and we helped them with a design and actual fabrication of this bar they were able to try out on patients,” Quellhorst says. The doctors who use what’s called the Ponseti technique got another idea for a training aid after working with Protostudios.

“One of the things that they’ve asked us to look into is the ability to print a foot complete with the bones and tendons and muscles and things like that — but with transparent skin,” Quellhorst says.  “And these would be used as training devices for the doctors who are applying the Ponseti method.”  He says the new 3-D printer they recently acquired uses special resins that could create such a foot.

“If it works well, that’s their intent, is now to have us print a number of those to be distributed among the doctors practicing the Ponseti method,” Quellhorst says. Quellhorst says the number of requests from the medical community for their work has increased as doctors saw how they worked. But, he says they are still available for anyone with an idea for a product that wants to bring their dream to reality.