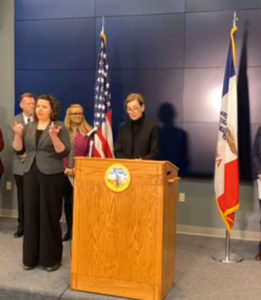 Governor Reynolds gives an update on the coronavirus.

Governor Kim Reynolds says the state is taking steps to expand child care options and ensure low-income students can get school lunches even as schools in the state are closed due to the COVID-19 outbreak.

“I think I’ll state the obvious, again, this is an unprecedented time for our state and our nation,” Reynolds said at the open of a news conference late this afternoon. “We are monitoring the situation in real time and making evidence-based decisions to mitigate and slow the spread of the virus.”

On Sunday, Reynolds recommended that Iowa schools close for four weeks. The U.S.D.A. has given Iowa a waiver, so Iowa schools can continue to provide meals to low-income students on a “grab and go” basis.

Earlier this afternoon, legislative leaders announced they plan to waive the requirement that Iowa schools reschedule canceled days between now and April 12. The governor said policymakers will reassess after that, as school officials consider whether summer school may be required or whether members of the Class of 2020 meet the requirements for high school graduation.

“But right now, this really gave them I think some relief that they were looking for as they try to plan what their next steps are in educating Iowa students,” Reynolds said.

It was on Monday of last week that the first case of COVID-19 was confirmed in Iowa. The governor announced late this afternoon that a 23rd case had been confirmed, in a Dallas County resident.

“A second shift is being added to the State Hygienic Lab to expand our testing capabilities. Our daily capacity will now increase from 54 to 108 tests per day,” Reynolds said. “When the situation warrants, we are ready at that point to add a third shift so that we can run tests around the clock.”

Reynolds told reporters she hopes to get at least two of the “drive through” testing sites set up in Iowa, with priority given to first responders, health care workers and Iowans above the age of 65. President Trump has urged governors around the country to try to secure more ventilators for hospitals that will be inundated with critical COVID cases. State officials say details about how many ventilators are in the state today is confidential. Reynolds said she’s talked with private companies about getting more here.

Some other governors and big-city mayors have ordered the closure of bars and restaurants. Reynolds is not taking that step, but she is encouraging Iowans to avoid crowds and stay home as much as possible.

“Practice social distancing, so don’t cram yourself into some of those venues. You have a role to play in helping us mitigate the spread and to bend the curve,” Reynolds said. “…There’ll be another St. Paddy’s Day next year.”

The governor also urged Iowans not to hoard food or other products. She said inmates in the state’s prison system will start making hand sanitizer.