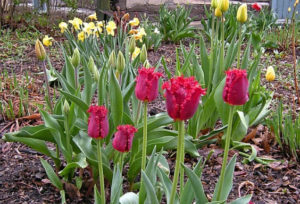 Pella’s three-day “Tulip Time” festival in early May has been canceled.

The annual festival, which started in 1935, has only been canceled once before, back in 1946. Valerie Van Kooten is the executive director of the Pella Historical Society and Museums. “It is disappointing,” she says, “and it was the product of a couple of weeks of meetings and talking and watching.”

She says after the warnings about group gatherings from the Centers for Disease Control and the Iowa Department of Public Health, canceling was the right decision for Pella residents as well as the volunteers, visitors, and vendors who would be involved in Tulip Time activities. Cindi Atkins, chair of the event’s steering committee, says with this advance notice, vendors may be able to cancel purchases of the food and other items they’d hoped to sell during Tulip Time.

“That might potentially reduce the amount of money they will lose,” she says, “although it’s going to be a financial hardship for so many.” She is encouraging residents in the Pella area to shop local and support the churches and non-profit groups in the area that depend on Tulip Time revenue

The annual springtime celebration of Dutch culture had been scheduled for May 7th, 8th and 9th this year. In 2017, a record-breaking crowd of 200,000 visited Pella during the festival’s three-day run.