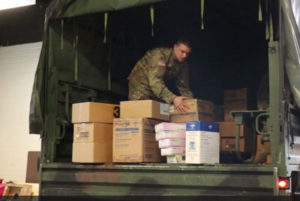 Iowa National Guard soldiers are continuing deliveries across the state of medical personal protective equipment and other supplies needed during the coronavirus outbreak.

“The National Guard has a unique role to play because it’s both a state entity and a federal entity and so we have unique capabilities with our equipment and the trained personnel that we have. It’s available to the governor for her to call up in a time of need,” Wunn says.

Wunn says there are currently 42 soldiers on state active duty status.  “This really is one of those operational types of missions where we’re able to use our military equipment to help transport important commodities across the state to those who need it,” Wunn says. Wunn says soldiers this week also delivered and assembled two large tents in Oskaloosa for the Mahaska County Health Partnership.

Jasper County Emergency Management- Program Coordinator, Josh Harding, helped line up some of the supplies that were delivered. He says the National Guard has always been a vital partner to emergency management — and in this situation, it’s a little more visible than normal.

He says the Iowa Guard helps in many ways that often go unnoticed. “Even in day-to-day operations, the National Guard is always a partner. Like today, with the National Guard delivering supplies, the CST team that’s always available to us out here in the public to support missions that may be unique or different or outside of what we are used to dealing with,” according to Harding.

The missions are supported by units from the 1034th Combat Sustainment Support Battalion out of Camp Dodge in Johnston. Soldiers from the 1133rd Transportation Company, out of Iowa City and Mason City, and Detachment 1 of the 1168th Transportation Company, out of Marshalltown, worked alongside the Iowa Department of Homeland Security and Emergency Management to distribute the supplies.

(Pat Blank of Iowa Public Radio contributed to this story.)