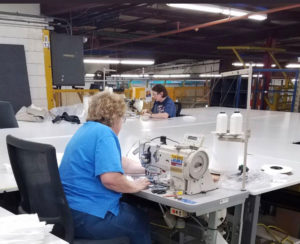 A group of sewing professionals in Forest City are making at least 6,000 face masks for a Mason City hospital.

The Winnebago Industries employees work in the “Stitchcraft” facility and normally sew curtains, cushions and other items for the inside of the company’s motor homes. Chad Reece, director of corporate relations for Winnebago Industries, says the company contacted key state agencies and quickly designed a pattern.

“With that, then, they were able to sign off on this and we’re now in production and delivering those to Mercy One as we speak,” he says.

The first batch of face masks was delivered to the Mason City hospital on Monday. Reece says as the COVID-19 crisis continued to evolve, the company’s executives began looking at ways Winnebago could contribute locally and employees were eager to get going. Some of the industrial sewing machines have been moved, to ensure employees are social distancing and following other Centers for Disease Control guidelines as they do the work.

“I think a lot of people maybe thought this might be something we could do,” Reece says. “But the reality of making this happen takes a lot of logistics support and that was on behalf of a lot of employees here in the company.”

Six-thousand masks are being made in the first production run and Reece says Winnebago may produce more, but has to evaluate the demand for the goods and the company’s ability to get the materials needed to make masks.

“We’re certainly open to helping wherever we can,” he says, “but I think we have to be realistic in some ways to not know exactly what the future holds, so we’ll continue to move forward as best we can.”

On Tuesday, Governor Reynolds announced the State of Iowa has placed orders with traditional manufacturers for two million surgical masks and another half-a-million N-95 masks that fit closely to the face and filter out most airborne particles. The state also has ordered a quarter of a million health care gowns and half a million plastic face shields.