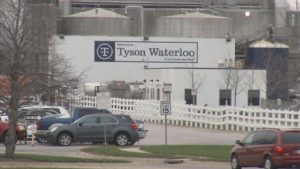 Nineteen elected officials in Black Hawk County are calling on Tyson to voluntarily close its meatpacking facility in Waterloo due to a spike in COVID 19 cases they say are connected to the plant.

Waterloo Mayor Quentin Hart says a temporary shut down would allow for deep cleaning of the facility and for all employees to be tested.

“I believe that this is a time to stand up and not be silent,” Hart says. “…These are our neighbors, our family members, people that we know and love.”

The Tyson pork processing facility in Columbus Junction was shut down April 6th and earlier this week the governor confirmed there’s an outbreak among workers at the southeast Iowa plant. The state has sent 15-hundred test kits to Black Hawk County to address what Governor Reynolds called a “suspected outbreak” at the Waterloo facility. Representative Ras Smith of Waterloo said a temporary shutdown is needed to protect the safety of workers and the rest of the community.

“The longer that we wait to adequately address this crisis and this issue, the longer and worse the destruction will be,” Smith said. “…The time for wait-and-see is done.”

Earlier this afternoon, the Iowa Pork Producers issued a statement in support of keeping the plant open. The group said closing the facility would create significant hardship for northeast Iowa farmers who would have to euthanize their hogs.