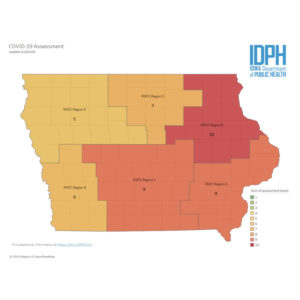 The latest state report shows testing has confirmed another 389 cases of COVID-19 in Iowa, by far the largest single-day total so far in the pandemic. Sixty-seven percent of these new cases are connected to the meatpacking industry.

An Iowa Department of Public Health news release indicated 177 of the new cases are employees at the beef plant in Tama and 84 work for Tyson Foods. State officials aren’t indicating which Tyson plants, however.

Tyson announced Sunday it will close its Perry plant Monday for deep cleaning after employees there tested positive for COVID-19. The governor has confirmed an outbreak of the virus at Tyson’s plant in Columbus Junction.

Three Democrats who serve in the state legislature have filed an OSHA complaint about the Tyson plant in Waterloo. Representative Ras Smith of Waterloo said the plant should be temporarily closed for cleaning.

“I implore the governor to help us with all hands on deck to protect the future of Iowa pork producers, help us with accountability with bad actors during this time of crisis and ensure the health and safety of workers and community members here and across this great state,” Smith said Friday at a news conference,

Senator Bill Dotzler of Waterloo said if action’s not taken at the Tyson plant, the virus will spread through the community.

The lawmakers say from April 9th to the 18th, the number of COVID-19 cases in Black Hawk County rose 900% and they’ve blasted state officials for refusing to say how many cases are connected to the Waterloo plant.

Tyson ran a full-page ad in the Sunday edition of the Waterloo Courier, outlining steps the company has taken to protect workers and emphasizing the plant’s role in the nation’s food supply chain.