You are here: Home / News / Selling sandwiches during pandemic is helping Jewell Market come back 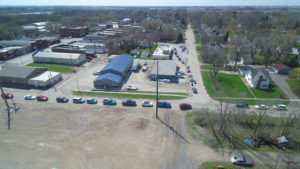 A small grocery store that served residents in multiple communities around the Hamilton County town of Jewell aims to reopen in about six weeks, thanks, in part, to the coronavirus.

Closed since December, the Jewell Market has been offering “grab-and-go” drive-up pork loin meals in recent weeks to raise money toward reopening. Organizer Rick Young says he’s been bowled over by the compassion. “It’s just been unbelievable the support we have received, not only from Jewell but the seven or eight cities that the grocery store has served for many years,” Young says. “There’s license plates from other counties that are pulling in line and coming to help out.”

Young says they’ve almost reached their financial goal for the store. “We went from $80,000 about two months ago to now we stand at a total of $197,600,” Young says. “We just need about another $25,000 to make the thing so it’ll cash flow and work for the community and so it’ll be in good standing when it starts off.”

Jewell Market is close to raising enough money to reopen.

When it comes to the pandemic, Young says things have worked out for the best for the “grab-and-go” fundraiser, which is only being held on Sundays. “The COVID-19 thing I think has actually helped the event,” Young says. “People don’t have any place to go and they don’t have anything to spend money on. It’s a chance to get out for a Sunday drive as in the old days, wave at some friends and see what’s going on out in the world.”

If all goes according to plan, the Jewell Market will reopen on June 5th. Another drive-through meal is planned for this Sunday from 11 a.m. to 1 p.m. at the Jewell Market. An account is been set up at the First State Bank in Jewell to take donations for the market, too.