You are here: Home / News / New unemployment claims up again 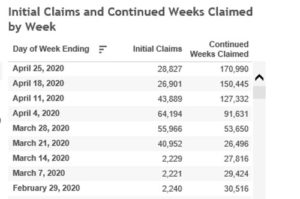 Some businesses forced to closed by the coronavirus outbreak will be allow to reopen in 77 counties beginning Friday. IWD deputy director Ryan West says it is hard to say how many employees will go back to work once the restrictions lift — but it should start to cut into the unemployment numbers.

“I wish I had the answer to that, I don’t know. Obviously, I guess will know more here in the next few days. As more stuff goes open — just through deduction of what’s going on — I would suggest hopefully so, yeah,” West says. The new unemployment claims in the last week are 975 more than the first-time claims filed the week before. The last six weeks have seen record or near record unemployment filings — with the peak week of 64,194.

West says many employers were searching for workers prior to the pandemic — and that hasn’t really changed. “One of the things that kind of gets lost in this are the employers who are looking for employers in this,” according to West. “Just like so many are kind of on the sidelines, so many are in the middle of it because they fit the industry needs.”

He says people who are still looking for a job can go to the Workforce Development website. “You are going to see a list of those employers out there. And we really want people looking at those opportunities because there is certainly an abundance of them. And as the weather gets nicer — that’ll grow obviously,” West says.

The first-time unemployment claims were led by manufacturing, with 7,402, Health Care and Social Assistance with 4,190, and the self-employed had 4,182 claims.