You are here: Home / News / April saw hot days and blizzards to end up with below normal temperatures 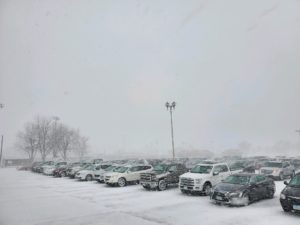 Some people celebrated their cars in the snow on Easter.

Iowa’s weather has turned cold and rainy after a pleasant weekend, reflective of the see-saw back-and-forth of snowy versus sunny days we experienced during much of April.

State climatologist Justin Glisan says last month featured some 80-degree days as well as near-blizzards, but wrapped up being colder and drier than average for Iowa. “In terms of temperature, we were about two-and-a-half degrees below normal,” Glisan says. “Then looking at rainfall, we were actually almost two inches below what we would expect statewide.”

One of the more unusual highlights during April was the heavy snow that hit parts of southern and central Iowa on the 16th and 17th. Some areas of the state have already gotten plentiful rain during the first few days of May but Glisan says computer models show the cooler, drier pattern may end up persisting for the month ahead.

“What we’re seeing temperature-wise, we were trending slightly below average,” Glisan says. “Now, with the current outlook that was released at the end of April, we have what we call ‘EC,’ or equal chances of above, below or near-normal temperatures.”

The models also show a slightly elevated chance for below-average rainfall, though he says cooler temperatures should lessen worries about drier conditions.

(Pat Powers at KQWC in Webster City contributed to this report.)